Air temperature can be easily and rather accurately measured with a thermometer or a thermocouple. Having determined air humidity and knowing the temperature, you can find all other parameters of air state analytically or with the help of d-I diagram.

The following methods of air humidity determination are most widely used in practice: psychrometric, dew point, hygroscopic and mass methods, at that the first method is the most widespread.

Psychrometric method is based on application of an instrument called psychrometer, which consists of two adjacent thermometers. One of the thermometers, an ordinary one, is called dry-bulb thermometer measuring air temperature t. A container with expanding liquid of another thermometer is wrapped up with a light hydroscopic fabric, for example, with cambric, as a case, the lower end of which is immersed in a vessel with water. The water rises along the case as along a wick to the container and constantly wets it. This thermometer is called wet and it measures air temperature as per wet-bulb thermometer tм ≤ t. Simplest construction of August psychrometer is shown in Fig. 1.

The air enthalpy does not change in steady process of adiabatic saturation as the return of latent heat (moisture vaporization transferred from air to water in the result of partial pressure difference of water vapours in saturated (over water surface) and unsaturated (being measured) air) is equal to transition from air to water because of the temperatures difference (t – tм) of sensible heat. It is seen from the expression for enthalpy:

in which at air adiabatic saturation the first term (sensible heat content) decreases, and the third one (latent part I) increases. The second term of this equation practically remains constant as d increases when t decreases.

However the ideal adiabatic process is possible at tм = 0 °C (lines I = const and tм = const in d-l diagram match at tм = 0 °С). At tм> 0 °C the enthalpy of saturated air (in the container) will be more than the enthalpy of unsaturated air (far from thermometer container) by the heat value of evaporated water 4.19·(dн – d)·tм, where dн – moisture content of saturated air, and d – moisture content of unsaturated air. Due to small value 4.19·(dн – d)·tм this process is practically considered to be adiabatic and air enthalpy – constant.

Relative humidity φ and other air parameters can be determined as per the air temperature t and psychrometric difference (t – tм). For simple determination of φ, psychrometric tables are made which are attached to psychrometers and are available in large variety of specialized literature.

August psychrometer drawback is its comparatively low accuracy due to essential effect of radiation inflow (from environment and subjects) to unprotected instrument when the air velocity near the spray is not enough (the motion is created only by free convection). That is why wet-bulb thermometer readings t‘м will be somewhat overstated in comparison with true temperature tм. According to Carrier data, at zero air velocity the error in determination (t – tм) reaches 14 %, and at 0.8 m/s air velocity it decreases to 2 %.

For accuracy improvement of wet-bulb thermometer readings, one resorts to artificial air velocity increase near psychrometer containers and its protection from outer thermal inflow (thermal radiation). When the air velocity near containers is 1.5…2 m/s, the error in determination (t – tм) is less than 1 %. It can be explained by the fact that at increased air velocity the convection heat inflow, which balances heat losses in saturated air layer near the thermometer bulb from moisture evaporation, increases, and relative effect of outer (radiation) heat inflows considerably decreases. Aspirating Assman psychrometer serves as easy-to-use and sufficiently accurate instrument for air humidity determination (Fig. 2). Both thermometers are enclosed in metallic tubes through which the air under study passes with 2.5…3.0 m/s velocity by using special fan with spring (mechanical) or electric motor mounted in the instrument upper part. The tubes surface for thermometers protection from thermal exposure is polished and nickel-plated. In other respects aspirating psychrometer is arranged like August psychrometer.

At positive air temperature psychrometers operate with error of ±1…2 %, at negative temperature the accuracy of their readings lowers at once due to formation of ice crust in a wet-bulb thermometer container, release of solidification heat etc.; at t ≤ 0 °C they are practically not used.

Dew point method is based on temperature tрос measurement of air cooled, for example, with metallic unoxidizable mirror surface (the temperature is observed on the mirror at the moment of starting of condensed moisture deposition).

Knowing tрос and air temperature tA, in diagram, represented in Fig. 3, moving up from point B on saturation curve along line d = const to isotherm tA, it is possible to find point A of their intersection, so humidity φA and other parameters of air state. 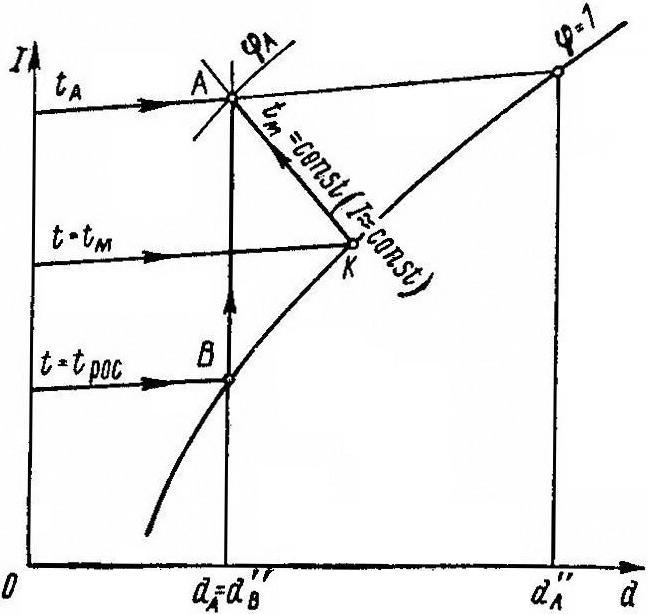 Dew point method is less accurate than psychrometric one. However it is used at temperatures not exceeding –70 °C (with measurement error of tрос ±0.1 °C).

Hygroscopic method is based on some materials capability to change their form and sizes (to lengthen – degreased human hair, capron thread and others), or properties (electrical conductivity – salt LiCl and others), when absorbing moisture from air in the amount being proportional to its relative humidity. That’s why, using these materials in mechanical and electrical bridge circuit, instruments of low accuracy, called hygrometers, can be created.

Mass (absolute) method is more accurate, but it is labor-intensive and requires special equipment – a fan, moisture absorbers and others. The air is blown through absorbers. Relating air flow rate to total absorbed moisture mass, one determines the absolute air humidity γп. As per the air temperature in tables of saturated vapour, its density γ″п, can be found, i.e. absolute humidity of saturated air; then φ = γп / γ″п.