The ammonia (NH3) is the most advanced among natural substances, which are used as working media in refrigeration units, and known under designation R717. Below we shall consider positive and negative properties of the ammonia using as a refrigerant in comparison with freons. 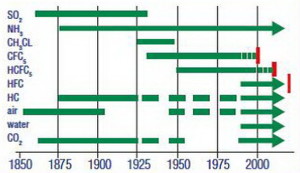 Fig.1. The duration of refrigerants use.

The ammonia refers to mean pressure refrigerants group and applied at a condensation temperature not higher than 550С in one-stage refrigerating machines to a boiling temperature of – 300С, in two-stage machines – to – 600С. The pressure-enthalpy diagram (P-i) is illustrated in fig. 2. 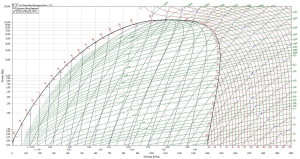 Thermodynamic characteristics of the ammonia and some freons are given in Table 1.

As seen from the table, the ammonia has a high value of evaporation heat that allows to decrease a refrigerant mass flow rate circulating in a refrigeration unit system compared with units operating on freons (in comparison with R22 – 5.94 times, R134a – 6.32 times). Especially this quality of the ammonia is essential when constructing high-powered refrigeration units (with refrigeration capacity more than 100 kW).

In consequence of adiabat high value (k=1.31), a high discharge temperature is typical for the ammonia, which can lead not only to oil decomposition, but also to its flash. It also confines the scope of air condensers use for ammonia units.

One of the ammonia disadvantages is that it causes copper alloys corrosion, especially in moisture environment, so unit pipelines, heat exchangers and fittings are made of steel.

The ammonia high electrical conductivity (1.1·10-7 S/m) complicates the construction of semi-hermetic and hermetic compressors working on the ammonia.

Since the ammonia is a substance of natural origin, it does not make any contamination exposure to the environment unlike most of freons. The environmental impact of various refrigerants is given in Table 2.

Table 2. The impact of various refrigerants on environmental conditions.

The ammonia is a substance with a strong choking odour harmful to human organism. The maximum allowableconcentration (MAC) of R717 in a working area comprises 20 mg/m3 and life-threatening volume content is 350…700 mg/m3. The ammonia is burnable at its volume concentration in the air higher than 11%, explosive at the concentration range from 15 to 28% and toxic. The negative properties of R717 force to take special measures providing a safe operation of ammonia refrigeration units that requires resolving organizational and technical issues from an operating company. When using freon refrigeration units,some of these issues drop away.

Meanwhile, the issues of ammonia safe use are successfully decided due to the following:

Summarizing the above mentioned, we can say that the ammonia has a good future as a working medium of variable power refrigeration units. When using it in a proper way, both desired safety level and high efficiency of the unit can be ensured.