Schematic diagram of simplest ARM is shown in Fig. 1, and its theoretical cycle is shown in Fig. 2 (air state in appropriate places of machine is designated with figures 1, 2, 3 and 4 on charts and installation diagrams). 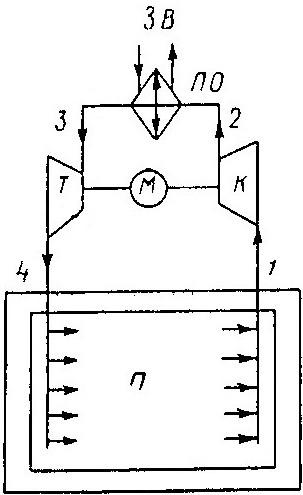 The specific work, expended for completing the cycle, is proportional to area 1-2-3-4 and is determined by the formula:

Reverse Carnot cycle 1-2′-3-4′ for temperature interval T1-T3 in the compartment to be cooled (T1 = T0 = const) and of ambient medium – cooling water (T3 = T = const) is shown in s-T diagram (see Fig. 2, b). As it can be seen, refrigeration capacity for this cycle is more and expended work is less than in the cycle of air refrigerating machine.

ARM practical cycle is shown in Fig. 3. It differs from theoretical one by pressure losses in ПО (from pд to p) and inner losses in compressor and expander – turbine, which are estimated by adiabatic (inner) efficiency of compressor ηк.а = 0.7…0.9 and turbine ηр.а = 0.7…0.85. 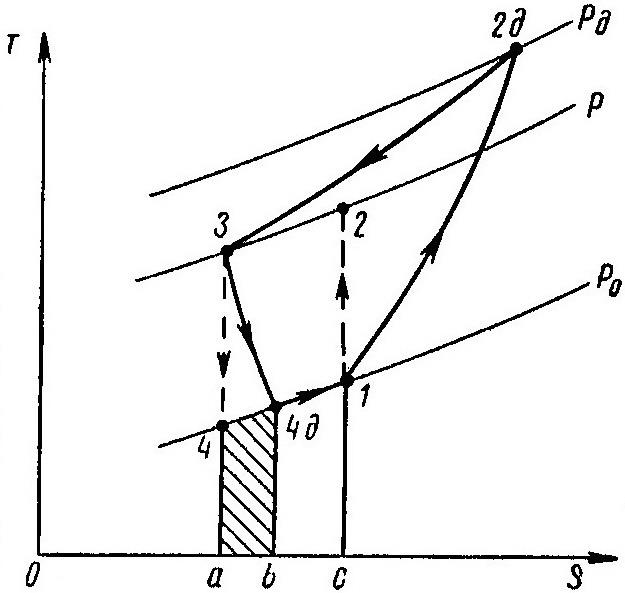 It is less than theoretical one q0 by the value of turbine losses (shaded area а-4-4d-b).

Actual specific work, kJ/kg, is more than the theoretical one by the value of compressor and turbine losses:

Then the actual coefficient of performance is as follows:

It is much less than theoretical coefficient of performance; usually εд < 1.

ARMs sufficiently rank below the most economical vapour-compression refrigerating machines in mode of conditioning and medium-temperature cooling. Power consumed by them in conditioning mode is 2…3 times as much as the power for VCRM.

However the ARM actual coefficient of performance at cooling temperatures of -70 °C and lower is εд = 0.46…0.58 and exceeds εд for VCRM. Economical operation of low-temperature ARMs, which can be applied for fish freezing aboard, increases by means of regeneration introduction.

Such ARMs are implemented in industrial production and operation in stationary practice.

Absence of special refrigerant in ARMs is their doubtless merit. In this case, free harmless air fulfills the function of refrigerant, and although ARMs have not found particular widespread application yet, they are used, for example, for air conditioning in airplanes, cars, sometimes on ships, at cold treatment of hardware items (t0 < -70 °C), in thermal vacuum chambers for aircraft engine testing, as well as in deep cooling units for gases separation, air liquefying and oxygen obtaining.

Waste heat of power plants can be used for ARM drive (on ships included).