A large variety of working substances, which can be used in refrigeration, as well as a variety of their thermodynamic and operational properties, shows that one substance having only positive qualities and properties is rather hard to find.

When choosing a refrigerant, it is necessary to consider and analyze all the properties and factors characterizing both the refrigerating machine operation (designation, refrigeration capacity and layout) and design features of its separate elements. Reducing the negative effect of selected substance properties should be sought as well. Besides, a refrigerant should meet the requirements to explosion safety, incombustibility, non-toxicity, thermal stability, stability in mixture with oil, and low cost.

The refrigerants properties effect on energetic, operational and design factors and characteristics of refrigerating machines and their elements, is a subject matter both for scientific research institutes and manufacturing companies of refrigeration equipment.

From the late 1970s a tendency to wider application of so called natural refrigerants (air, hydrocarbons, carbon dioxide and ammonia) is observed in refrigeration. The most widespread one is ammonia which has been already used in refrigeration over 100 years and known under designation R717. The ammonia popularity is connected with its thermophysical propertiesfavourablefor use in refrigeration.

Table 1. The recommended range of ammonia application as a refrigerant. 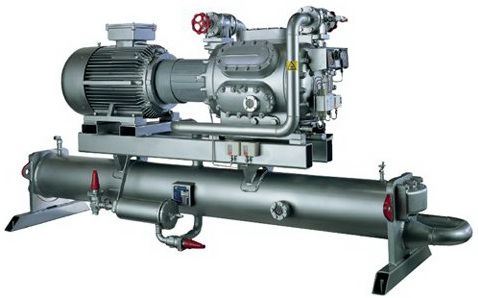 Fig. 2. The screw compressor unit with an oil separator and a water-cooled oil cooler.

In refrigeration industry at particular temperature conditions, centrifugal compressors are used as a part of the ammonia compressor unit, which general view is given in fig. 4, to provide a specified refrigeration capacity.

It is also required to specially focus on the fact that previously the ammonia was preferred when constructing high-powered refrigerating machines (more than 100 kW), but after 2007, when in Montreal the documents on tougher restrictions and prohibitions of ozone-depleting HCFCs use were signed, the ammonia was more often used in medium-powered machines (20…100 kW). Fig. 4. The ammonia refrigeration unit by Frigopol company with the refrigeration capacity of 2х20 kW for maintaining the industrial water temperature within a range of +4…+6 0C.

The past three decades in the USA, Japan and Western Europe the ammonia has been widely used in medium- and high-powered heat pumps cycles (200…8000 kW). Thus, since early 1990s in Norway several hundreds of ammonia-operated heat pumps have been installed for needs of large buildings and area heating systems. The refrigerant maximum pressure refrigerant maximum pressure in a cycle reaches 52 bar, and the temperature of water to be heated grows up to 90 0С. The example of such heat pump is given in fig. 5. The application of ammonia refrigeration units in manufacturing industry is preferred due to ammonia ecological and thermophysical properties.