The air penetrates into the refrigeration unit system on the low-pressure side when operating at boiling pressure lower than atmospheric one and during repair and maintenance works performance. The air builds up in a condenser and a steam part of linear receiver. The air entrained into the condenser leads to the following negative developments:

– reduction of heat-transfer coefficient from refrigerant side;

The air removal from the condenser and the RM linear receiver is performed with the aid of an air purger, and in the absence thereof, directly from the condenser. The second method is characterized by the refrigerant high losses. Air purgers are used to decrease these losses. Points of the air-ammonia mixture extraction for air purging should be chosen depending on condensers design and with regard for piping diagrams of condensers and linear receivers. The operating principle of all air purgers involves the ammonia condensation, containing in the air-ammonia mixture, at a temperature as low as possible.

Foreign manufacturers are presented with models “Automatic Air Purger” by GEA Grasso company, GP-2 by Johnson Controls Refrigeration (the former YorkRefrigerationLtd) company and others. The conceptual difference of GEA Grasso model is that the air purger is a separate cooling block, which operation does not depend on operation parameters of main refrigeration system. The air purger external view is presented in fig. 4.1. 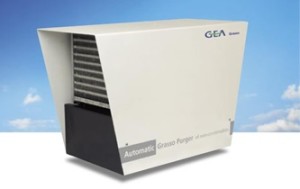 Air purger GP-2 is a part of refrigeration system and looks like a container with a coil placed in it. The air-vapour mixture cooling and the ammonia condensation is performed due to the refrigerant evaporation occurred inside the coil.

Liquid separators are welded vertical cylindrical vessels having branch pipes and connecting pipes for connection of liquid and vaporous ammonia lines, equalizing line, instrumentation and automation equipment. When the liquid level in the vessel raises to a dangerous value the refrigeration unit compressor switches off.

The fluid is separated from the vapour as a result of abrupt change of the refrigerant velocity and motion direction. The maximum vapour velocity in the vessel must not be more than 0.5 m/s.

Liquid separators designed for the working pressure being not more than 1.5 MPa are produced by the home industry. The temperatures working range is +40…–500С. The liquid separator diagram and general view are given in fig. 5.1. 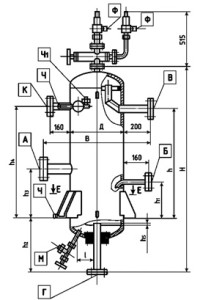