Ammonia vapours in bubbling oil separators come from the compressor into the inner pipe, which outlet is 125…150 mm below the fluid level in the apparatus. When the refrigerant vapour passes through the liquid refrigerant layer, not only oil drops are gathered but oil vapour becomes condensed as well. The fluid level is maintained by its continuous flowing from the condenser or the linear receiver. The bubbling oil separator is a vertical apparatus. The oil separators model range of this type with a body diameter from 257 to 1200 mm and with a volume from 0.05 to 3.67 m3, respectively, has been designed by the home industry. The diagram and the general view of bubbling oil separator are given in fig. 2.1.

The principles of reduction of vapour velocity, flow deflection, filtration, cooling and centrifugal forces are used in inertial oil separators. Most of these principles are used in cyclone separators. The oil is separated due to the sharp reduction (up to 0.5 – 0.8 m/s) of refrigerant vapours velocity and their direction change. As a result, oil drops gravitate to the lower part of oil separator, and refrigerant vapours with oil residue are entrained into the system.

The disadvantages of cyclone oil separators are:

Oil drops are separated from refrigerant vapours during the working medium flow passing through a packed bed consisting of several layers of fine mesh. Reticulated oil separators are widely used as part of refrigeration units with screw oil-flooded compressors.

Combined oil separators are made as a combination of inertial, reticulated and cyclone oil separators. The efficiency of such oil separators reaches 99.5%. The disadvantages are structural complexity, high cost and hydraulic losses. 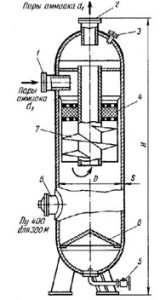 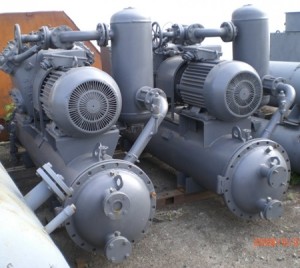 Fig. 2.5. The inertial oil separator as a part of refrigerating machine block

The oil separation efficiency in inertial apparatuses makes on average not more than 65%. The cause of such low efficiency is that the oil part is taken away in a vaporous state. In order to increase the inertial oil separators efficiency the water cooling for oil vapours condensation is brought in. The cooling water is supplied into the coil placed inside the apparatus.

The choice of oil separator is made upon the diameter of compressor delivery nozzle with regard for such parameters as discharge gas flow rate (compressor capacity) and refrigerant velocity in a pipeline. The oil from oil separators and other apparatuses is discharged into the oil receiver.