The influence on energy parameters is caused by irreversible processes occurring in heat exchangers, i.e. the heat transfer at terminal difference of operating media temperatures. Besides, a part of energy is consumed to overcome the hydro- and aerodynamic resistance of these mechanisms.

In this regard, when selecting heat exchangers, a set of basic requirements are specified to them:

Heat exchangers of refrigerating machines are divided into two groups upon their functionality:

An application of auxiliary heat exchangers is determined by unit operation mode and cycle characteristics. They are designed to increase the effectiveness of some operating processes and the cycle in whole. Hence, the application of auxiliary heat exchangers improves service properties of refrigerating machines, raises their reliability and economical operation.

In terms of design, ARM heat exchangers can be performed in the form of shell-and-tube, shell-and-coil, plate, coaxial (“tube in tube”) apparatuses, air-cooling units and so on.

The following devices belong to the basic group of heat exchangers:

Guntner finned-type tubular air condensers of AGVH and AGVV series, intended for operation on the ammonia, are shown in fig. 2 and 3, respectively. 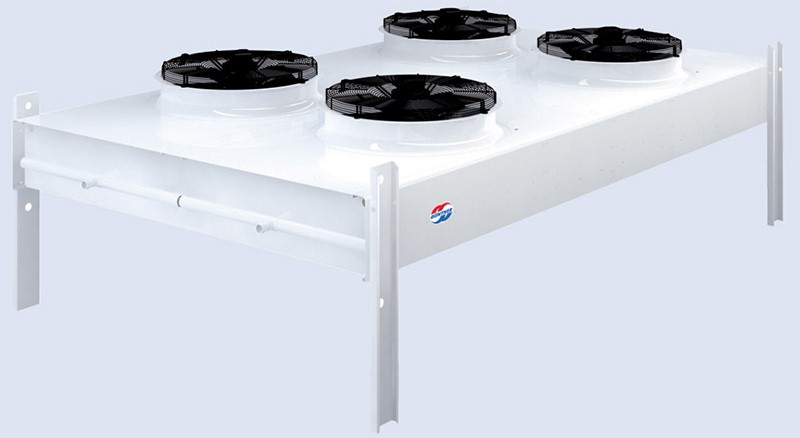 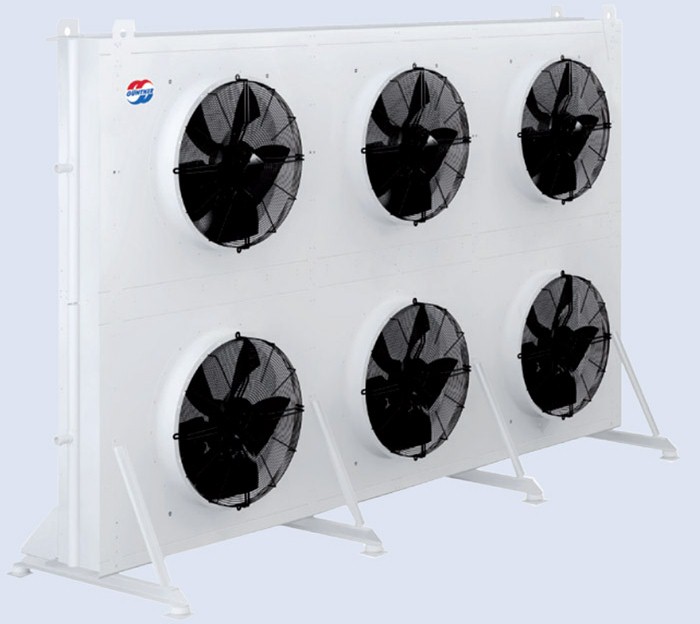 As per refrigerating medium type evaporators can be divided into the following groups:

– evaporators for chilling of liquid cooling media and technological products;

– evaporators for chilling of air and gaseous technological products;

ONDA shell-and-tube evaporator of LSE series with in-tube boiling is illustrated in fig. 4.

A refrigeration unit includes apparatuses, meant for cold application, as well as refrigerating machine apparatuses, among the former are air coolers, batteries and devices cooled with a cooling medium.

When using RM for air cooling in compartments, an evaporator is applied as an air cooler, in which a boiling refrigerant takes away the heat directly from the air during its natural or forced circulation.

When there are several users of refrigeration, the refrigerating machine evaporator may consist of some batteries-air-coolers with direct-expansion cooling, installed in one and more compartments alike.

Alfa Laval air cooler of Arctigo IS series, intended for operation on the ammonia, is illustrated in fig. 5. 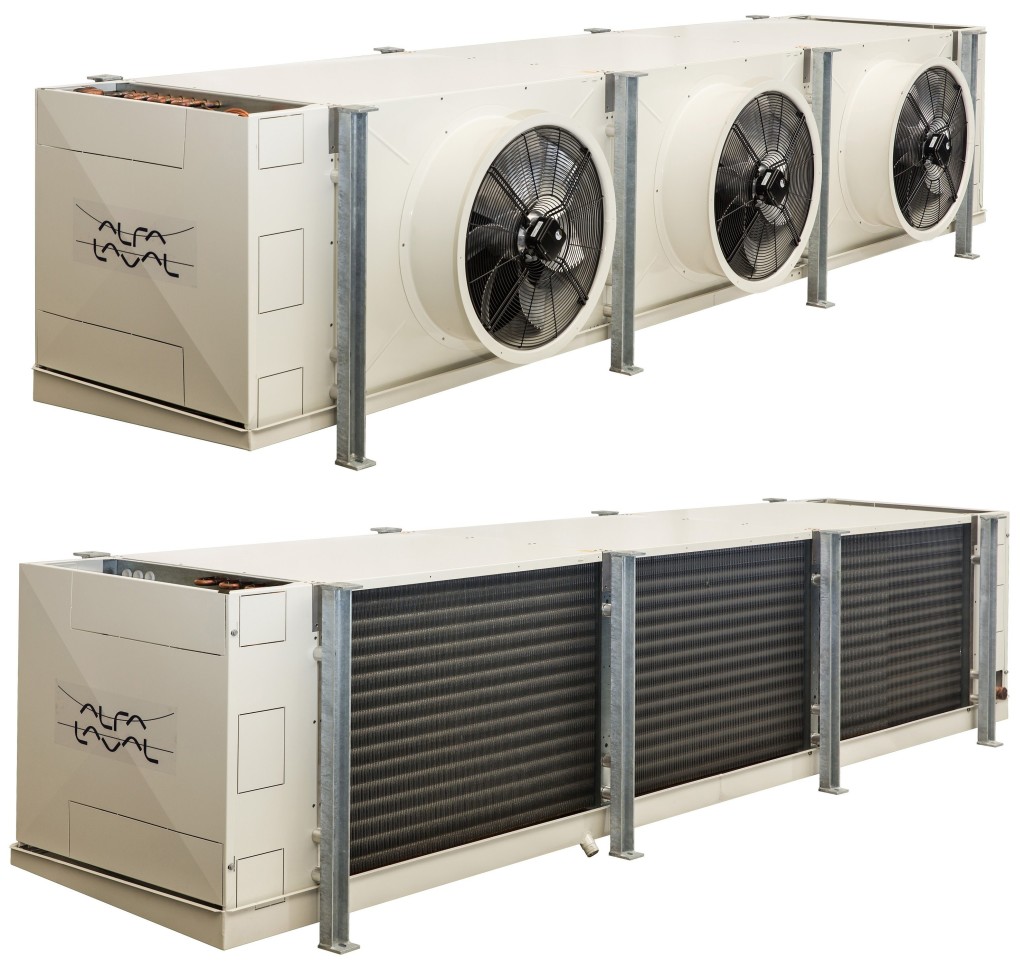 Guntner air cooler of GHK series, intended for operation on the ammonia, is shown in fig. 6. 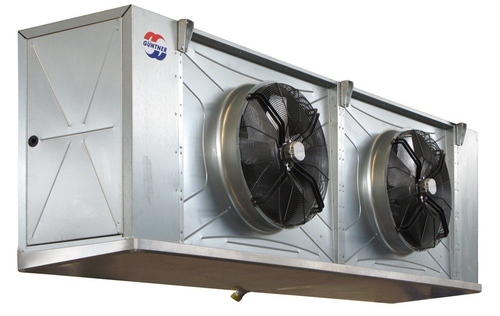 Also brine air coolers, in which a cooling medium takes heat off the air, may be used in the system.

Depending on operation conditions or other design features, a brine cooling system (when a refrigeration unit evaporator cools an intermediate cooling medium, which circulates in the system) may be used in the refrigeration unit system. The example of water-cooling RM is so called “chiller”, which disposes a chilled coolant to fan coils – local air coolers.

An intermediate vessel, a subcooler, an economizer and an oil cooler belong to auxiliary heat exchangers of ammonia RMs.

An intermediate vessel is brought into RM process flow diagram to increase operation economy of low-temperature ARMs with two-stage compression, and performs the following functions:

– liquid refrigerant cooling before its expansion.

A subcooler is brought into the diagram between a linear receiver and an expansion valve, and intended for liquid ammonia cooling that enables to reduce losses during liquid refrigerant expansion. Water-cooled subcoolers are generally applied in ARMs.

Alfa Laval plate heat exchanger of TS6 series is shown in fig. 7. Heat exchangers of this type have got a vast scope of application and may be used both as principal and auxiliary ones in ARMs. 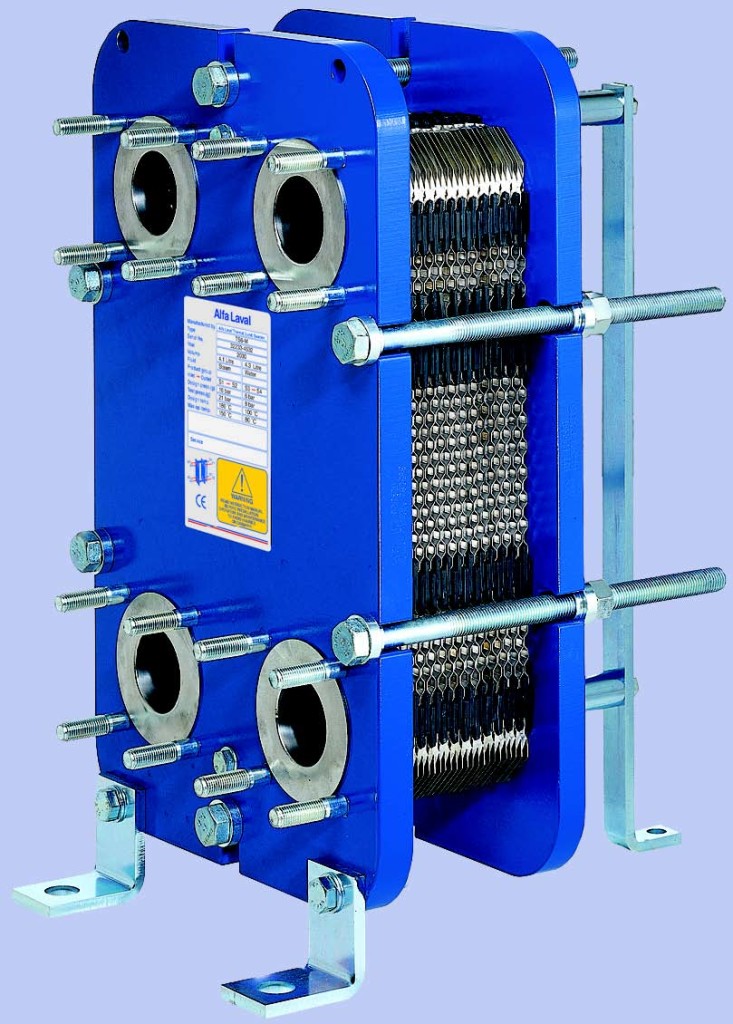 Oil coolers are ones of crucial components of screw oil-flooded compressor units and designed to cool down the circulating oil. Depending on a chilled medium, oil coolers are divided into water-cooled and air-cooled. Water-cooled oil coolers, which are made as shell-and-tube heat exchangers, have gained a widespread application. As a cooling medium, the water from circulating-water system should be used.